Greetings from the top of Indochina! 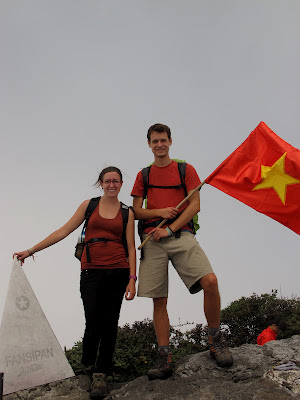 Last you heard from me, I was in Hanoi, waiting to board YET ANOTHER overnight bus to go to Sa Pa, Vietnam.

[A small digression on overnight anythings in Vietnam... As a cheapass traveller, overnight transportation is about as good as it gets because a. you don't waste any precious days on your already too short visa and b. it acts as transportation and accommodation all in one and don't have to spend more money on a hotel. BUT, and that's a pretty big BUT, it sucks. A lot. The first overnight bus I took, I paid 25 extra cents for a toilet (who wouldn't?) which ended up as luggage overflow and was then locked for the entirety of the trip. When I climbed into my snug little bed, I learned that it was just that... snug. And little. About a foot too little.  As I drifted into a semi-sleep like state, I started to smell something horrible only to discover that something... and I still don't know what... was dripping all over my blanket and it smelled heinous. When I told the driver, he just shouted at me in Vietnamese, threw a pillow at me, and pointed at the aisle. Guess where I slept that night.

The SECOND overnight, I thought... ah hell no, I'm not doing the bus again. So I opted for the slightly more expensive train. However, the lady behind the counter refused to sell me the sleeper bed on the train and I was forced to sit in a "reclining" chair. For a while, it was fine, apart from the two countryside men across from me that were drinking a questionable brown liquid from a Fanta bottle. Then around maybe 3 in the morning, we hit a bump or something, the train lurched and the air con vent snapped open, dumping me in air conditioner fluid. Not a drip or two, but a lovely waterfall came crashing onto my head. On the bright side, it happened to NO ONE else and everyone on the train who was awake had a good laugh at my expense.

The THIRD overnight was inevitable, as I was racing to get to Laos so I didn't overstay my visa in Vietnam and everything about it was wonderful. The vents were on the side, the beds were long enough, and no one was snoring. I was finally relieved to be on a bus that wasn't going to suck when I noticed the empty bed next to me was crawling with cockroaches.

And now. I'm in Laos. Trying to get to Huayxai. And I have just been informed the ONLY bus that goes there is overnight. Sigh...]

Sa Pa is in Northern Vietnam and it's home to a bunch of lovely hill tribes and gorgeous step rice fields that if you are interested in seeing, I suggest you google it. Because the entire time I was there, it rained. I couldn't see anything because the whole town was in a cloud.

But I booked a trip up Fanzipan, the tallest point in Vietnam, Laos, Cambodia, and Thailand, hoping it'd clear up.


Oh, that dude is Alex. I met him in Sa Pa and he accompanied me on our hike up Fanzipan. Oh, and also, it sounds like Fancy Pants, hence, the title of this post.

Alex and I attempted to do things around Sa Pa, but the rain and subsequent mud foiled all our plans and we just played pool all day. 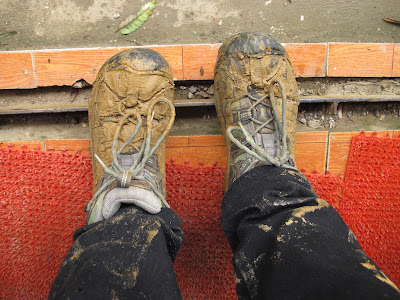 The climb up Sa Pa is a 2-3 day trek and even now as I write, I do not know what this mountain looks like. I was told you could see it from Sa Pa, but only on clear days. Even as we were climbing it, the peak was always in clouds and we didn't see it until we were ON it.

So, we hiked, ate lunch around 2200 m at camp, which included this delightful pup: 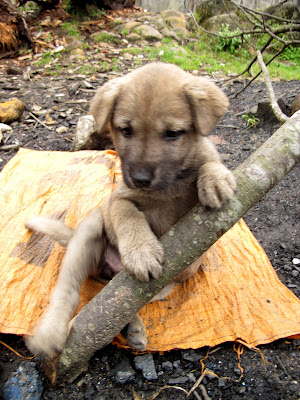 Then continued up to 2800 for some dinner and sleep. It was a pretty challenging climb. There were very few gradual inclines, instead we go up 200 meters, down 75, up another 200, and so on and so forth.

The porters had no problem at all though.

About halfway up, the clouds broke for a glorious second! 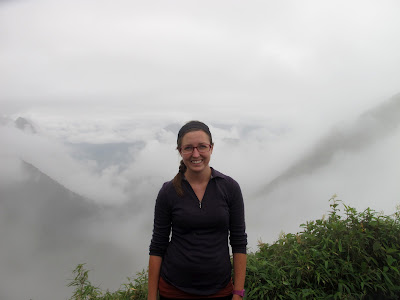 And then, the summit! 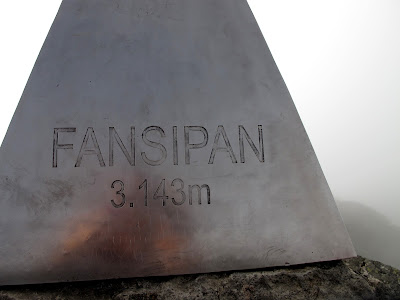 After all was said and done, we had to wait for the other members of our group to reach the summit before going back down. We waited. And waited. And waited. I had a bus to catch at 7 pm and I was guaranteed back at 4. As 3 o clock came and went, I decided to go back down with the porters. However hard the ascent was, descending with the porters was 1242353256309x harder. It took us 2 days to climb the damn thing and I raced down it in 3 hours. I arrived in Sa Pa a half hour before my bus and I was a sweaty smelly person. LUCKILY most bathrooms have a shower in them (even public ones!) and I managed to scrub 2 days of jungle off me. You are very welcome dude next to me on that bus.

Anyhow, like I said, I'm overnighting to Huayxai, Laos next and I hope to update y'all on my time here in Luang Prabang soon!

Till then, Yay White Sox!
Posted by Sarah Kappel at 1:35 AM 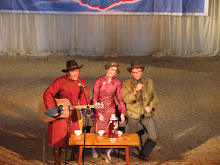